The Drupal CMS has always been at the forefront of ambitious digital experiences, even when these were confined to the web. As a viable open-source equivalent to proprietary platforms such as Sitecore, Drupal has remained the go-to choice for enterprise users throughout its nearly 20 year long lifecycle.

Drupal has come a long way since its early days. Each major version represented a significant improvement over the previous one, with Drupal 8 introducing many of the most sought-after features while optimizing the experiences of developers, content editors and site builders.

The just released version 9, then, represents the most significant shift the CMS has seen to date and paves the way for a new outlook on digital experiences. This post will provide an overview of some of the most notable novelties with Drupal 9 and why they’re so groundbreaking for the digital sphere.

First off - Gartner’s abandoning of the Magic Quadrant for WCM 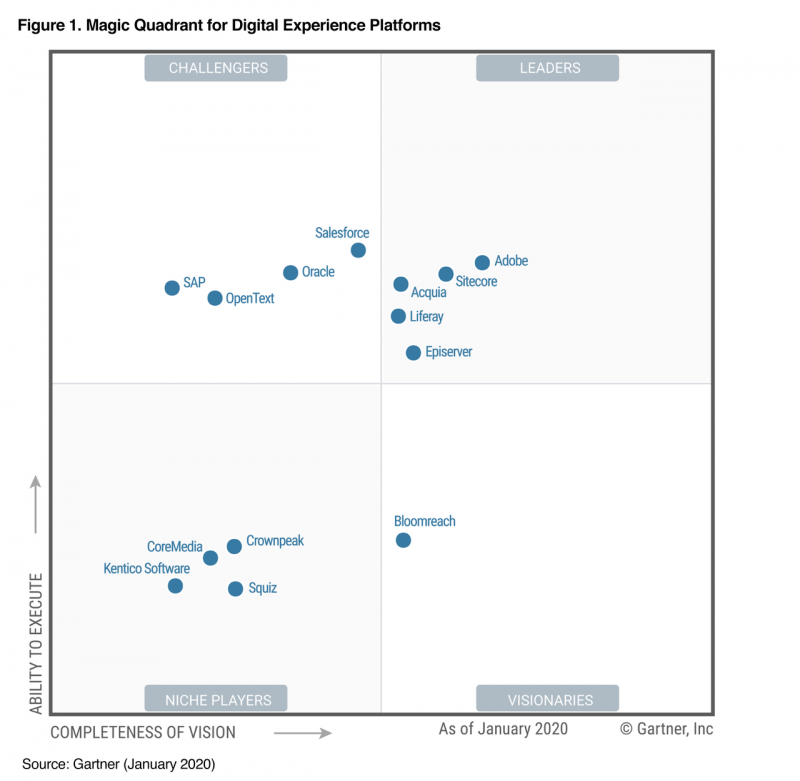 Gartner, along with some other notable people in the industry, was one of the first to realize the shift in the collective mindset from web content management to digital experience management.

To this end, they abandoned their WCM Magic Quadrant in January 2020, prioritizing instead the DXP Magic Quadrant, where the Drupal-based Acquia is positioning itself as a key player.

With the release of Drupal 9 and Acquia’s recent acquisitions, this sets the stage for a new era for digital experiences, Acquia is able to position itself as the leading open-source digital experience platform, competing even with established proprietary solutions.

Not wanting to fall behind with the times, users of Drupal have pointed out its outdated front- and back-end themes. To this end, development of the two revamped themes began, with the Claro back-end theme released in late 2019 and the front-end theme, Olivero, planned for 9.1.

The new themes feature a modern, slick look, which assures a good user experience that never comes at the expense of accessibility. Having a reputation as a very accessible CMS, Drupal 9 retains its commitment to accessibility with the two new themes.

Vetted and tested by a huge community of experts

Incredible amounts of organizations and individuals in the Drupal community have during the past months been busy getting everything set for the release of Drupal 9. Updating and removing dependencies began well over a year ago, but since the start of 2020, we’ve seen many initiatives focused exclusively around getting 9 ready for a stable June release.

Here are only a few of the most notable people and organizations that definitely deserve a shout-out: Gábor Hojtsy, the release coordinator; Matt Glaman, the author of drupal-check; the 1xINTERNET team for their commitment to the Porting Weekend and the release celebration; and many others dedicating their time to the project.

Such thorough vetting and testing logically also guarantees stability and security, in which previous iterations of the CMS already excelled, but which Drupal 9 has prioritized even more strongly.

Drupal has committed to being an API-first framework, and version 9 continues with this trend. The REST API allows it to function as a “headless” or “decoupled” CMS, enabling numerous possibilities for integration.

These integrations can either be with other web frameworks, e.g. e-commerce and/or front-end, or they can even go beyond the web thanks to Drupal’s powerful multichannel capabilities, which version 9 is likely going to further develop and streamline.

By now, you might be wondering “But where are all the groundbreaking changes you’ve touted?”. Well, this is exactly what’s so groundbreaking about this major release. As Dries Buytaert, Drupal's founder and project lead, has stated: “The big deal about Drupal 9 is … that it should not be a big deal.”

Drupal 9 capitalizes on Drupal’s existing strengths, while prioritizing a smooth and easy upgrade process focused on backwards compatibility. Users who make sure to keep their Drupal 8 codebases updated to the latest minor version will be delighted by an unprecedentedly easy upgrade.

Basically, the main goal of the 9.0 release is helping as many users as possible update to the most up-to-date version, while subsequent minor releases will be able to innovate more and deliver new features. 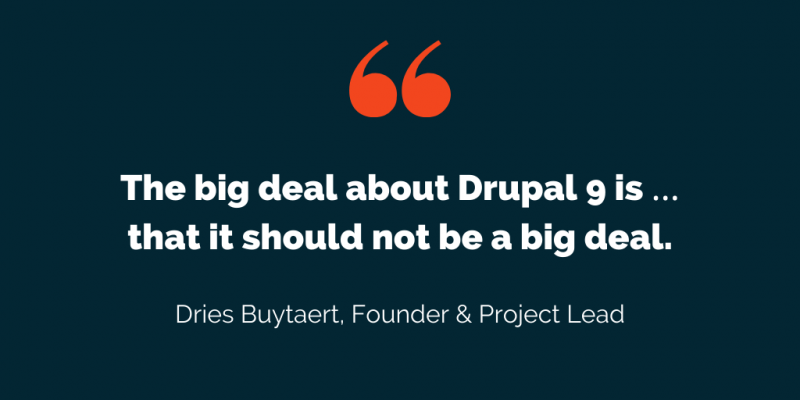 The release of version 9 truly cements Drupal as a leading open-source digital experience framework, combining all the benefits of open-source software with powerful enterprise capabilities.

Due to the rising need for digital experiences, software needs to at once be future-proof and prioritize innovation in order to still be relevant in light of future trends and disruptions. As a framework that’s only grown more and more relevant throughout the 20 years of its existence, Drupal is sure to remain a key tool in the future of digital experience.

The release of Drupal 9 represents a major milestone in both the framework’s evolution and in digital experience management. We’re very excited to see what this will mean for the project and its community, as well as the digital industry as a whole.

If you’re on the latest version of Drupal 8, you can update to 9 completely hassle-free by simply removing deprecations. If you’re still on an older version, or even on a different CMS, you can leverage Acquia’s CMS Migrate tool to migrate smoothly to Drupal 9.

If you have any trouble migrating, or need custom functionality for your new Drupal 9 site, give us a shout out and we can help you tailor Drupal’s powerful features to your specific needs (we've already migrated a website from Drupal 6 to Drupal 9 before yesterday's official release!).