DrupalCon North America is the biggest and probably the most important event of the year for Drupal. During normal times, the conference itself was hosted in a new city every year.

Even though the event was primarily targeted to the North America audience, by going virtual it was actually able to more easily attract people from all over the world.

As a virtual event, this year’s DrupalCon NA turned out to be much more accessible in terms of logistics and investment.

Agiledrop would probably have attended and supported the in-person event too, but going virtual made it a bit easier for us (and our families, and as a company that values work-life balance this was a really great fit).

Our “One hour for Drupal” campaign

Like every year Agiledrop was sponsoring the event, and as a sponsor we were able to have a booth at the event. Normally we would bring some swag with us to hand over to booth visitors.

But, since handing out our famous notepads (designed for Drupal website wireframing) and fitness bands (that can help you flex your team) wasn’t really possible at a virtual booth, we had to look for something else.

We wanted to give away something meaningful for the Drupal community. We remembered a great campaign that our friends at Dropsolid had at DrupalCon EU 2019 called “Help Make Drupal Shine” where they gave contribution time for anyone who filled out a survey.

Right away, we knew such a campaign would be perfect for an event like this: we would devote 1 hour of contribution time to the Drupal community for each person who visited our booth during the DrupalCon week and claimed our special offer.

We were very happy with the turnout: 55 people ended up claiming the offer, which means 55 hours will be devoted to Drupal’s open-source code (in addition to our regular contribution, of course)!

What’s more, we’ll be emailing everyone who claimed our offer to ask them about which Drupal projects or initiatives they would like this hour of contribution time to be spent on. This way we’ll make sure that the time we devote to Drupal through this will be spent as meaningfully as possible.

Thank you to everyone who participated in this campaign, and thank you in advance for the feedback and ideas on how to best spend the 55 hours.

The virtual DrupalCon was hosted on a conference platform called Hopin which has a great feature of facilitating networking with random other attendees.

Networking and meeting new people is one of the best things about attending a Drupal event, but it is often missed at virtual events, so this was a great virtual alternative to “bumping into people during coffee breaks”.

“It was a real pleasure to connect and talk with really interesting people in the networking section/page of the conference platform. For example, I met Albert Hughes, the author of the famous Drupal Rap video, and Alec Reynolds, the CEO at Tandem and Lando - a tool our developers often use for local development, and even the founder of Drupal Dries Buytaert.”

Just like every DrupalCon, whether in-person or virtual, this year’s event offered a wide selection of great sessions on several different tracks. The main stage featured the excellent keynote presentations, with the heavily anticipated Driesnote which is always one of the highlights at DrupalCons.

There were also keynotes dedicated to some of the most important ongoing developments for Drupal, such as the Decoupled Menus initiative and the Drupal 10 Readiness initiative.

Among the non-keynote sessions, one of our favorite ones was Preston So’s and Nani Jansen Reventlow’s session on advancing digital rights for everyone, which is a topic that’s particularly relevant in the current times of social upheaval with people also being more dependent on digital experiences than ever before.

Another session that we just couldn’t miss was Yan Zhang from Digital Echidna speaking about building resilience through energy management, providing invaluable tips and sharing relatable personal experiences which made her advice resonate even more.

Of course, all the things happening in-between speaker sessions also contributed to a fantastic experience for everyone: the yoga sessions, the awesome Spotify playlist, the great interactions from community members and, last but not least, the cat filter Zoom meme seamlessly pulled off by members of the Acro Media team! 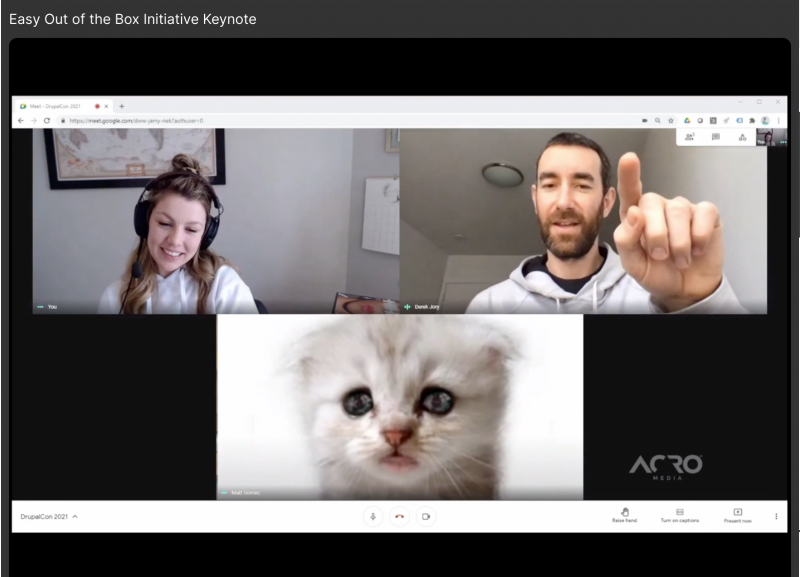 With everyone isolating ourselves for well over a year now, being able to attend DrupalCon and having an experience that was as close to an in-person event definitely lit up the year.

A lot of the features provided by Hopin and the DrupalCon organizers really gave that warm communal feeling of attending a vibrant in-person conference, which isn’t that easy to achieve - so, big kudos to Hopin and the organizers for this, and a big thank you to everyone working tirelessly for the attendees to have this experience.

It was really great to hear from and connect with our friends from the community. We can’t wait to see you all again in-person and have a chat over a cup of coffee. Until then, though, if virtual Drupal events keep being this awesome, it seems like we’ll get by okay!