Drupal is one of the leading free and open-source content-management frameworks. It provides a back-end framework for at least 2.2% of all Web sites worldwide. But to establish itself at this level, Drupal overcome a long and painful path. We will therefore guide you through the early beginnings of Drupal and present you how everything started.

In a year 2000 Dries Buytaert and Hans Snijder, two students on the University of Antwerp, needed an internet connection. Latter was rare for Antwerp students, so they set up a wireless bridge between their dorms. They also needed a place to talk to each other, so Dries, who is still known as a founder of Drupal, started a small news site with a web board, where he and his friends could talk about where they would meet, share interesting news and so on.

Until Dries graduated, the software they had built was nameless. But after that they wished to stay in touch, so the internal site had to be put online. When looking for the right domain name, Dries considered »dorp.org«, as a Dutch for village. He mistyped it into »drop« and it stucked. Later, he even thought that mistake sounded better. However, website attracted new members, and they started talking about new web technologies and other ideas. 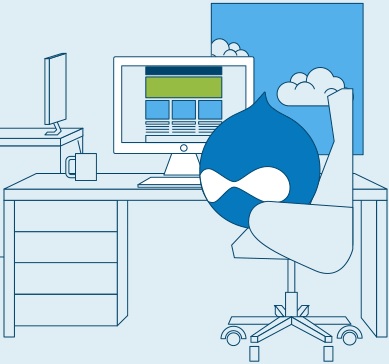 It wasn't until January 2001 that Dries decided to release the software behind drop.org and therefore Drupal became an open source project. The name Drupal was derived from the English pronunciation of the Dutch word "druppel," which means "drop." It needed a symbol too, so Kristjan Jansen and Steven Wittens stylised a Druplicon with eyes, curved nose and a mischievous smile.

The first version of Drupal was based on Slash, a modular CMS, and Scoop. There were 18 core modules, each one a PHP file containing a set of routines. In fact, everything was accessed through PHP files, because there was no menu router. The code had to be input into one of the seven hooks in the modules. The admin one, was the only one, which could be used only by administrators. To modify database, you imported an SQL file. There were only 15 tables. Themes were already in the core. They were simple, elegant and flexible. You were even able to create your own themes, because you controlled colours, mark-up, layout, and block positioning. Features included story submissions, diary, accounts, comments, search, RDF headlines and a calendar. Any user could become a contributor. 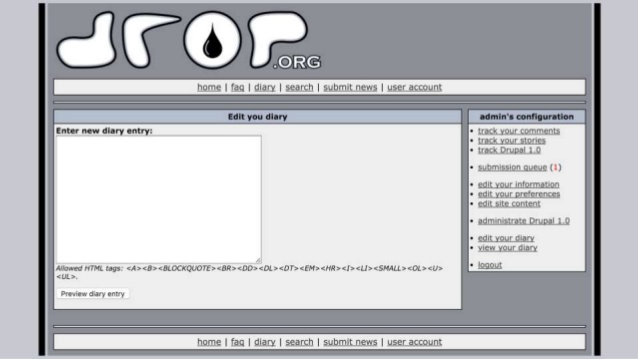 The second version of Drupal was released on 15. 3 2001. It had one major improvement. That was translation feature. Namely, many people loved to see less English and more of their own language, so Drupal allowed them to either create or overwrite their site in a different language. To do that, they had to manually edit the configuration file and SQL database. There were also other additions in this version, like user ratings, sections for stories, a user permission system and the ability to rewrite a comment. 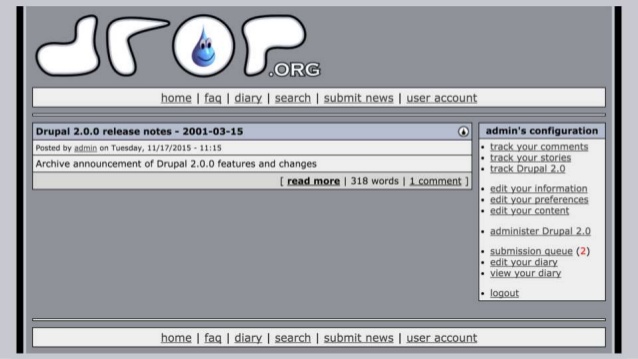 On third version, everything was based on nodes. They became a primary unit for the content. All types of content (book, story, forum, diary, blog) existed as a node and were managed by node module. Only comments were not nodes. They were only connected to them. It was very early decision to focus Drupal on Nodes and not on pages. But it wasn't until ten years later that nodes became the basics for the mobile web and that web resolved less and less around pages.

The evolution from Drupal 4.0 to Drupal 8.0 will be presented in one of our next blog posts.