History of the Druplicon, the famous Drupal symbol

Does everybody know a story how the Drupal was created? It's quite interesting.

Dries Buytaert and Hans Snijder were students at the University of Antwerp back in 2000. Back then a broadband internet connection was a luxury, so Hans and Dries set up a wireless bridge among the student dorms to share Hans’s ADSL modem connection among eight students. Dries made an online forum, where they shared news like where they were meeting, having dinner, etc. This software was nameless for a while. Then Dries graduated and left the dorm. They wanted to stay in touch so the internal site had to go online.

Dries came up with a name Dorp, witch in Dutch means “village” and he liked that. When looking for a domain Dorp.org, he mistyped as Drop.org. Mistakes are often good, so the name stayed. In 2001 Dries decided to release the software behind Drop.org, which he named Drupal.

Once Drupal was initially developed, a logo needed to be created and the concept would have to include a drop, of course - the same theme that inspired the software name.

In today’s article, we will see how Druplicon was changing trough years.

First commit of drop.org logo in Jeroen theme. The logo was created by Dries’ nephew, whom he shared the dorm with, Jeroen Bensch. Jeroen used Gimp, drawing all the details pixel by pixel.

Drop.org logo in Marvin’s theme. Dries’ comment: "Updated and renamed my two themes: I removed redundant boxes and tried to work towards simplicity."

First sighting of Druplicon in Drupal CVS in Marvin theme, upgrading a typeface. The idea of Kristjan Jansen aka “Kika” was to put two drops sideways together to form an infinity symbol. When placed inside a filled circle, it resembled a face. After more work by Steven Wittens, aka. “UnCodeD”, the Druplicon was created: a stylised drop with the "infinity" eyes, a round nose and a mischievous smile.

Another version of Druplicon was added to Trillian theme.

Commit of giant misc/druplicon.png. This month drupal.org was getting separated from drop.org, some content migrated and first project issue created by ax.

Drop.org logo was excluded in the themes and replaced with the Drupal logo. This is the point where Drupal finally got a life of his own. Note that Druplicon got some finer gradients by Steven aka. UnConeD but basic shape was still the same. 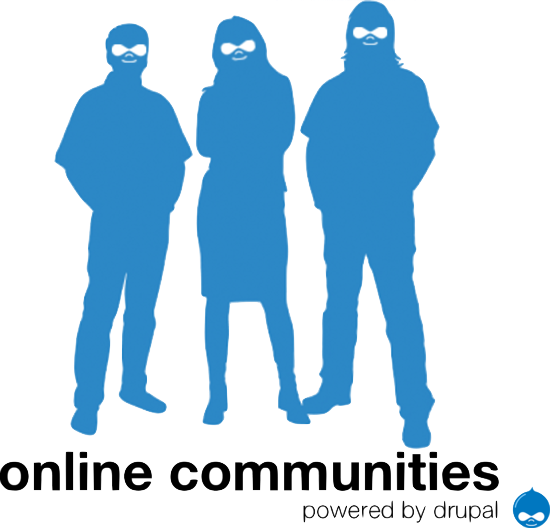 3D Druplicon as we know it now was created by UnConeD/Steven.

Drupal 5.0. was released. "3D Druplicon" is introduced to Drupal core themes by kkaefer. He update Bluemarine, Chameleon and Marvin themes with the current 3D Druplicon.

And for the final, our logo looks like this now.