Published by Tim
on 20 November 2019
in Community & Drupal 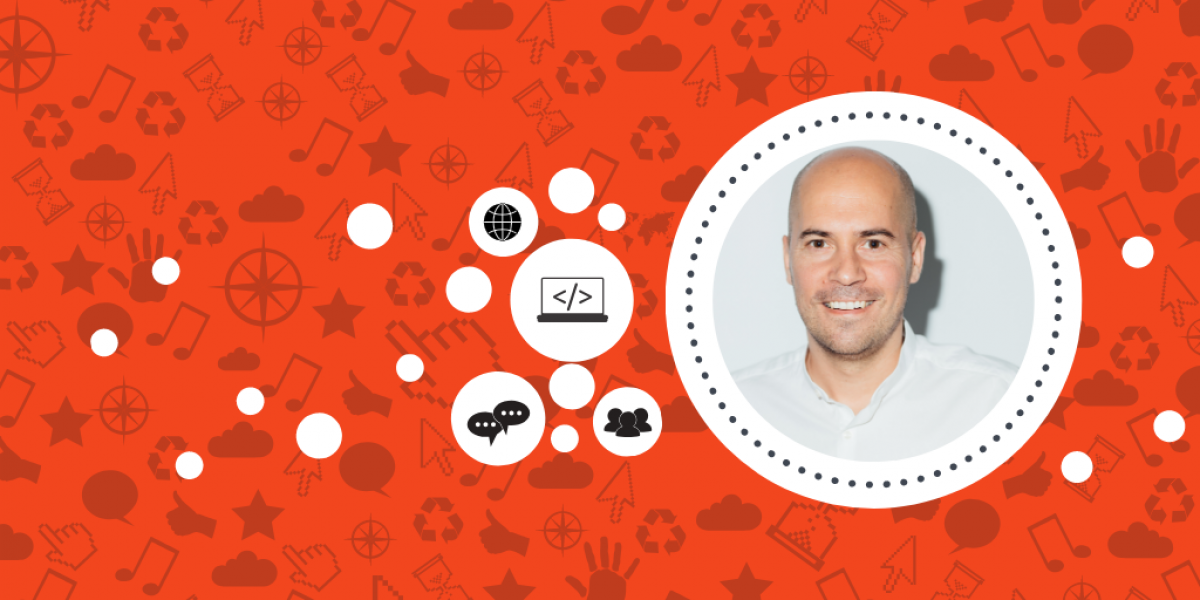 In our latest Drupal Community Interview, we spoke with Alex Moreno López, Technical Architect at Acquia. Alex shared with us his thoughts on the future of Drupal and open source, what technologies he's most excited about, and who has inspired him the most in the tech industry.

I am a Spanish expat living outside of London in a beautiful little town where I have the peace and calm I need to find myself productive, while I stay 20 minutes from London and the same from two main airports for wherever I need to travel for work (which is often nowadays). The last few years I’ve been in different development roles doing PHP, Symfony and Drupal, but also many other things around that ecosystem, like Ansible, Docker, ... and anything I find interesting really.

My recent interests are still around technology, but also about promoting open source and Drupal in circles where we are not normally going to promote it. For example right now I am sitting on a train back from Extremadura Digital Day, where I came to talk about Open Source business models and examples like Red Hat or the Acquia/Drupal environment itself.

I think we have to promote Drupal outside of our own circles, so I am trying to build a plan around that and see where I can get to.

Back when I was finishing University I researched a few CMS. I built a phpnuke for the LUG (Linux User Group) that I founded (hey friends at GLUEM :-)). During that period it appeared clear to me that content writing and software Engineering (my degree) were the two things I was most passionate about. Finishing university and starting my own business meant that I had to find ways of building sites and apps to fit different purposes in an efficient way. I had suffered some of the pain of JSP and Java building some things while finishing my degree, so I didn't want to make the same mistakes.

That was the point I got in contact with Joomla, WordPress and Drupal finally. I built things in all of them, but especially Drupal got me hooked by the power and possibilities that it was already offering. I think it was between Drupal 4 to 5. People were like “wow, why use Drupal when you have Wordpress, so much simpler”. But that was not the point for me, the point was the potential that I saw in there in order to scale and build so many more complex things than you could have thought of initially.

At some point I decided that I was not brilliant at doing business, I was just doing OK but not brilliant, so I decided to move to the UK to learn more about engineering in the real world, teamwork… and not just business. I've been extremely lucky and blessed to have crossed paths with incredibly talented colleagues with some of the biggest and most complex websites in the world, you all know who you are, thank you all. As they say, the rest is history... for me I guess.

Drupal has allowed me to travel, to live abroad, but I could probably have done the same in any other technology, as some of my friends have. Who knows. The things I keep closer to my heart and mind are the friends that I’ve made and keep making during that trip along this thing called life.

What any other technology does not have is the sense of community and giving back that the Drupal community has. Open source is going through an important and critical moment.  Add community and together we'll be able to find the path through the problems that we are facing in the whole open source community, like the sustainability of the ecosystem on its own.

Funnily enough and as I was mentioning, I think we have to make a lot more effort to visit places where Drupal is not well known, marketeers, business conferences, tech festivals. Places like that where there are a lot of people that would love to see what you can do with Drupal.

How would I explain it to them? I would say that Drupal is a tool that allows you to materialize your digital Dreams in a way that you don’t necessarily need coding knowledge.

This is going to be more and more true and relevant as Drupal 8 and things like Layout Builder mature, and no code or low code is going mainstream. In my opinion if you combine both, the future and possibilities are really exciting, but there is a lot of hard work to do ahead.

It's a complex time, with lots of strong competition inside and outside our open source world, but we are in a very desirable position. We have to remember that our competitors are not in our own open source world, but out there, and we should make more efforts to build bridges between the communities. That is already happening, with Drupal and Symfony being the clearest example, but this is just the beginning of what can be an unstoppable force like Linux was at some point in the server market (which now is 90 high percent of that market).

I admire people not only exclusively in the open source world that have inspired me to be better in different aspects, like Robert Martin (unclebob), Martin Fowler or Kent Beck for how much they have contributed to software and the agile and craftsmanship movements, but also people like Richard Stallman or Miguel de Icaza in the Linux and open source communities.

Then in our little PHP/Drupal world, I am amazed by people like Jeff Geerling in terms of how much they can get done while life happens for other mortals, or the commitment and passion of people in Drupal core like Gábor Hojtsy, Tim Plunkett, Wim Leers... There are a lot of people in the community that do not get any proper recognition though, but to be fair it would be impossible if you look at what makes Drupal great (see http://drupalcores.com/index.html).

More than 5500 contributors, some of them with a lot of work invested as I already mentioned, but lots more with small little contributions. If you look at the numbers, those core contributors make this thing really work, but they contribute between 0.5% to 3% of the total of commits. That’s open source in its purest state. And yes, I agree that the number of commits is not a very reliable measurement tool, but it gives us an idea of what is going on under the hood.

There is a lot going on at the moment. Some people may already know about Acquia BLT, a tool that eases the pain of building artifacts, deploying to cloud, automating tasks like testing etc… I wish I had known about it much earlier, back when we created similar custom much inferior solutions that became a pain to maintain.

The one I am particularly excited about is Acquia Dev Studio, which is in Beta right now but is evolving very quickly. It promises to be the substitute of the fantastic Dev Desktop that a lot of people in the community have used, but taking that idea a bit further. The same reason people are excited about Gatsby or Nuxt.js, because they wrapped in an opinionated way different tools to save you time, Dev Studio does the same wrapping local tools like Lando (and DDEV soon) but also everything you need to go from local to prod, like the CI/CD flow, git hooks to ensure the team follows Drupal best practices…

I also maintain the WebP module. If you are interested in performance and making your site faster (which we all should for our users' sake) then you should have a look at this module.

Software craftsmanship as I’ve already mentioned has had a big influence on my way of approaching personal growth and learning new stuff. I am in a moment in my life where dev technology excites me like the first day, but also all other (soft?) skills required for developer relations, project management, public speaking, etc. It also helps me to find the balance between having your head down for hours in code and learning things that are compatible without having your head exploding after too many hours focussed on a thing.

And of course, who is not interested in all this stuff going on regarding decoupled technologies, React/Angular, etc? I just wished I had 40 hours days to be able to learn and do more, which I appreciate can be overwhelming at times (it does for me at least), and one also needs to find hobbies outside of technology, family, exercise, open air and nature, ...