We had a great talk with Kevin Kreuzer, Google Developer Expert, freelance software engineer and writer for Angular In Depth. Read on to find out more about Kevin's entry into the world of software and what excites him most about JavaScript and the Angular community.

1. Please tell us a little about yourself: what is your role in the Angular community and what do you do professionally?

I am a Google Developer Expert in Angular and work as a freelance software engineer in Switzerland. I am a JavaScript enthusiast and love modern web development. Currently I am building Angular component libraries for a big client in insurance.

Coding is more than just a profession, it’s my passion. I love to learn new things and to share my knowledge with the community. Therefore I spend a lot of time working on articles, open source libraries or workshops.

I am the author of 6 open source libraries and was the most active writer of the Angular In Depth publication in 2019.

2. When and how did you first enter the world of software development?

Compared to a lot of engineers I started to program pretty late. In fact, I wrote my first lines of code in university when I was 21 years old.

Coming from a business / marketing background I was not really aware of programming and how a career in it could look like. To be honest, I only entered the software development path due to a lot of coincidences and for that I am grateful every day.

I have an amusing anecdote from when I first started with programming. I was visiting some courses at a university in Western Switzerland, where they speak both French and German, and a teacher asked me if I had visited any courses and in which language. I replied: “German”, but what he meant was which programming language… So I also had that beginner experience.

3. What about Angular specifically - when did you first encounter it and what about the framework first attracted you to it?

After university I started to work as a Java developer. I worked in a field where the business logic is very complex and it requires quite some time until you are able to write your first lines of code, especially as a junior dev coming from university.

At this job, I had a person that was showing me around and helping me get started. We called this person my “Godfather”. And I had the luck to get the best Godfather I could. Instead of throwing me right into this huge and very complex code base, he gave me the opportunity to work on some helper tool which was written in AngularJS.

At that time, I was not too happy about it, I had no clue about AngularJS or JavaScript and I was eager to start working on the Java project. But then, I started to write my first features on the helper tool and learn about JavaScript and Angular.

I immediately was fascinated. The feedback loop was so fast, and you could both build something visual or use Node.js to build backends. And Angular itself I really liked, as I could build complex things easily with it. I suddenly had one language to rule them all. I knew this was it.

I reduced my work time on the project to take another University course to learn JavaScript and AngularJS. Furthermore, I started to work on a lot of side projects in my free time.

4. What impact has working with Angular made on you? Is there a particular moment that really stood out to you?

To be honest, programming in general to me feels like the only wizard power we humans have. It's so cool that you can build everything you want. So if you have a nice idea, just go ahead, build it and put it out for the world to see.

Sharing ideas and code connects us and builds a community. This is especially true when you work with Angular. Angular has an amazing and extremely welcoming community which is very open to feedback.

Recently, I was joining a video chat where I was speaking to some other authors of the Angular In Depth publication. There were people from all around the world, Russia, India, Ukraine, Germany and so on.

I actually never met those people in person, but still, talking to them felt like talking to a group of friends. We were talking about Angular stuff and about libraries which I build with my laptop on my couch, and now I was talking about them with a person on the other side of the world. How cool is that?

5. How did you see front-end development evolve through the years, in particular Angular and JavaScript frameworks? What do you think we’re likely to see in the future?

JavaScript has evolved a lot. With Node, JavaScript has become the language of everything and is now used in backends, build systems and so on. It has gone from the “script kiddy language” to a programming language large businesses depend on, no longer just used for frontend, but also for backend, build tools, even IoT if you want - basically everywhere.

But not only tooling, the language itself has also evolved. With ES6, JavaScript introduced a lot of new concepts like arrow functions, classes and modules. The rising popularity of JavaScript resulted in a lot of tools, libraries and frameworks.

I think in Angular some of the biggest wins are TypeScript and RxJS. TypeScript gives us type safety which I think is essential in enterprise projects. RxJS on the other hand is perfect for handling user interactions and for building user interfaces.

I think in the future we are going to see more usage of WebComponents, especially with Angular Ivy. Being able to build parts of a UI in the framework of your choice and use it in whatever framework you want can be very valuable to teams and companies. 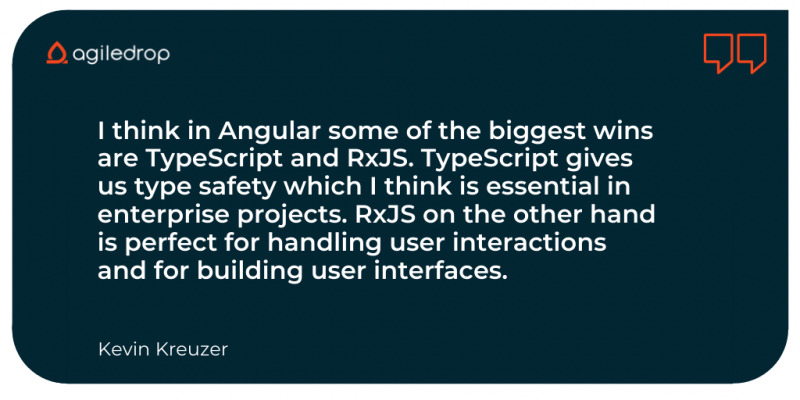 6. What are some of your Angular projects or initiatives that you have particularly enjoyed and are proud of?

Of course I am proud of all of my open source libraries. Especially of the most recent ones like ng-sortgrid, svg-to-ts or @angular-extensions/pretty-html-log. And I am also working on a new library which is not yet finished but already looks promising.

Besides my projects I really enjoy the Angular CLI. It’s an amazing tool to get you started and scaffold an Angular application, doing all the heavy lifting for you. Furthermore, I am a big fan of reactive programming with RxJS.

Spoiler alert - I am currently also working on a tool based on my favorite article that I’ve written so far, which I think is going to be really cool.

7. Finally, what are you most excited about this year in Angular or front-end development in general?

This year we got the Angular 9 release with the long desired new rendering engine Ivy.

It’s pretty cool what Ivy gives us today, but the possibility it brings for the future is what excites me the most. In my eyes, Ivy is the enabler to the future of Angular.

Thanks to Ivy, I hope that we can soon use renderComponent as an official API to create tiny web components using Angular. I am also looking forward to a possible zoneless change detection.

Besides Angular, I am pretty excited about NestJS, a project that allows you to write JavaScript in backend.