For our first interview of 2020, Marloes Bosch, accessibility-focused front-end developer at LimoenGroen, spoke to us about her career switch to Drupal, the awesome people from the Dutch and Belgian Drupal communities who have helped her along her journey, and why Drupal's commitment to accessibility is so important.

I work as a front-end developer with a focus on accessibility at LimoenGroen, a Dutch agency based in Amsterdam. As a community member, I try to share knowledge in every way I can, for instance by speaking at events, organizing conferences, supervising colleagues and just answering their questions.

Well, actually, I made a career switch only 3 years ago. Before I started developing, I worked in health care for about 10 years, I was a mentor to elderly people with psychiatric issues. Back then I had a colleague, Marga, who motivated me to learn Drupal, because she’s married to a Drupal developer Dirk Bazuin, and he encouraged me to learn Drupal.

So I bought this book, Kickstart Drupal 7, and I was really optimistic about it; I had that feeling of “Yeah, I’m learning Drupal!”

And I had to learn it in the evening hours because I worked full-time. It was really hard to learn it from scratch in your room on your own, you know, so I was ready to give up when Dirk, the husband of the colleague, asked me to go to DrupalCamp Ghent in 2016.

I was a bit unsure, because all the sessions were really technical, but in the end, I just bought a ticket and went. When I was there, I really had a hard time understanding all the sessions because I didn’t know a thing about Drupal.

I ended up staying with Drupal because of the community - in Ghent, there was a social event and I had a really great time, I was drinking really good Belgian beers and I met my current manager Baris who is one of the owners of LimoenGroen.

He asked me if I was eager to learn Drupal, and I said of course I want to learn it, and he gave me an opportunity to learn Drupal at his company, and I’m really glad and grateful for that. He offered me a job in January 2017 and I’m still working here - so, that’s definitely a good thing!

That would be at DrupalCamp Ghent as well, but in 2018 - the Ghent edition of the ‘Camp is really special to me, of course. So I went back there in 2018 as a first-time speaker and I was really proud of being invited to come and speak about accessibility.

Before the keynote started, Nick Veenhof came to me and he said: “I know your story, that it started 2 years ago at our DrupalCamp. Are you willing to motivate the students who are present at the event by talking briefly about your career switch to get them excited about moving into Drupal?” And I was really honored that he asked me to do that.

Well, that’s quite hard - it really depends on who’s asking. If someone has no technical background, I try to keep it simple and just give examples of websites that are made in Drupal.

I always try to emphasize that it’s open source, it’s free for everyone, and everyone’s able to learn it and to use it. If someone has more technical experience, I try to explain the possibilities that Drupal has to offer and the strength of the community behind it.

I started my Drupal career when Drupal 8 just came out, so I’m not really familiar with Drupal 7, and I think a lot of people say that’s a huge improvement. But the thing I see evolving, or at least my hope is, that Drupal will be fully compliant to the web accessibility guidelines.

I understand that it’s not possible to give every user an equal experience, but I think we should at least try to give as many users a very good experience in every way we can. I think we are socially responsible for that as developers; and, of course, we’re also legally obliged because of the accessibility act and all the new rules in Europe that are implemented right now.

I think Drupal 8, and Drupal 7 of course, still have a lot of accessibility issues, but I’m really excited about the Accessibility initiative; a couple of weeks ago Mike Gifford came by our office to explain a lot about it, and it’s just really cool that they’re doing this.

I’m organizing it for 3 editions now, starting in 2018. For two years it was in Utrecht and this year it will be in Minsk in Belarus. What we try to do is to make it a really pleasant experience for everyone.

So as a team we did a workshop about inclusion and diversity, we updated our code of conduct, we tried to invite a very diverse group of speakers, and we also hoped to unite more people with very different backgrounds, for example, by keeping the ticket costs very very low if you compare them with other front-end conferences.

Similarly to Frontend United - the initiative I want to highlight is Frontend Re-United, that’s a new concept we tried in 2018, initiated by Mathieu Spillebeen.

The idea was to invite a lot of front-end experts of the world to Utrecht back then for our Frontend United conference, and we streamed all those sessions to other parts of the world, to make it more accessible for people who don’t have the financial status to come to Europe.

So the “re” in “re-united” is referring to “remote”, and the idea was that local communities in Africa or Asia created a kind of meetup with local sponsors and the local community, and, no matter the time difference, we just live streamed the sessions, so they could watch them as the same time as we did in Utrecht back then. Or, if the timezones didn’t match at all, they could watch a recording and add local speakers to the line-up to create a schedule that did suit them.

We started out in 2018 with 4 locations, and last year we tried it again and we tried to improve it a little bit and we ended up with 14 remote locations. A lot of them have now updated their local communities and they organize meetups on a regular basis .

We helped strengthen their local communities and that’s a really good thing; we built bridges between multiple cultures and shared knowledge worldwide. All credit goes to Mathieu, it was his idea!

Beyond Drupal? That’s really hard! I used to make websites in my spare time when I was younger, and somehow I stopped doing that when I went to college.

So, I joined a local women’s soccer team a couple of months ago. I’ve not been notified by the FIFA yet, but, you know, I’ll keep dreaming.

That has been a really good thing for my health. I also met a lot of interesting people that are not developers, and there are a lot of interesting insights into websites and design and just into the work on the web other than from the developer perspective, and it was really really nice.

I would also like to take advantage of this moment to put my LimoenGroen colleagues in the spotlight. A big thank you to you all, teammates, for helping me grow as a developer as well as a person! 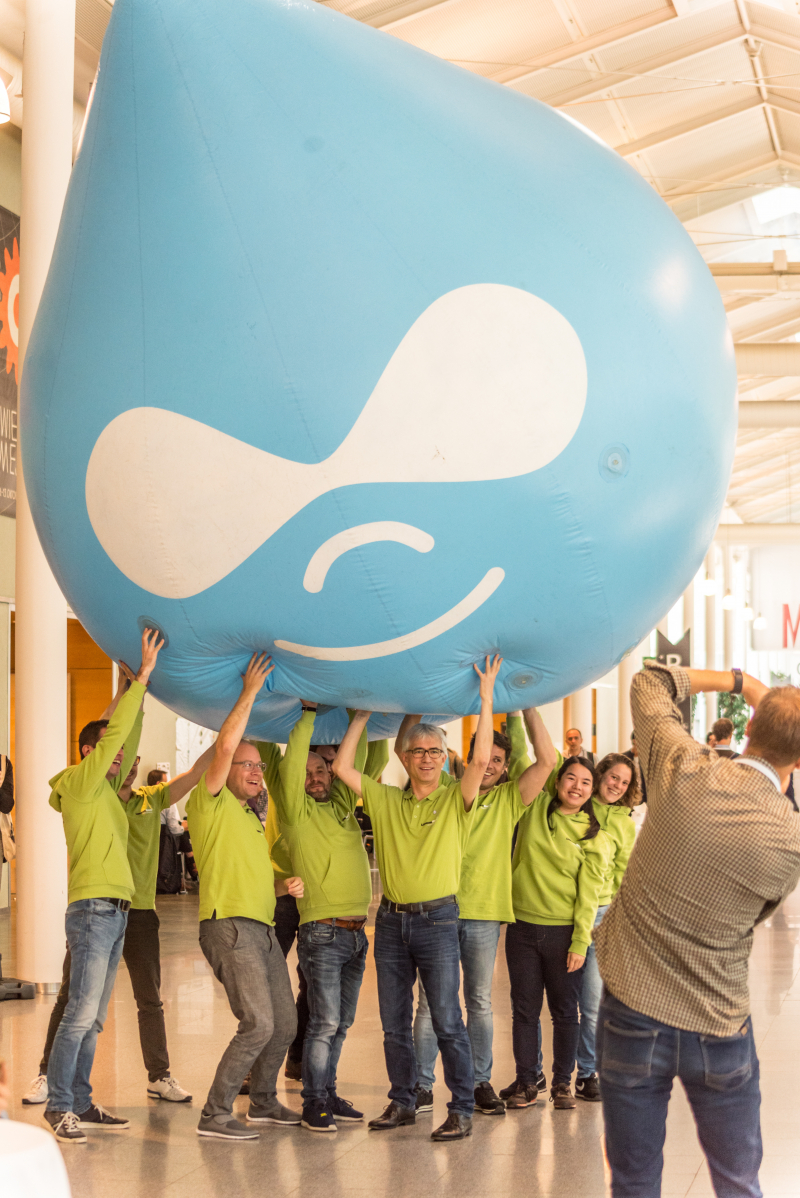