Agiledrop has officially joined the Acquia partner program as a Bronze Level Partner. Acquia invited us to join their ranks because of their goal to grow the business in the Central Europe region, where Agiledrop has already established itself as the leader when it comes to building enterprise-level Drupal solutions.

More than 8 years of experience with Acquia

Even though the official partnership is new, Agiledrop’s cooperation with Acquia and working with their product line is not new to us. Agiledrop’s very first project that involved an Acquia product was the development of a website for an iconic North American performance art group, known for its stage productions which incorporate many different styles of music and art. This was in 2013, and Acquia already had the best-in-class hosting solution for Drupal (that later became Acquia Cloud).

Throughout the years our team has been involved in many projects that involved other Acquia products, such as Acquia Site Factory and Acquia Lift (now known as Acquia Personalization). Our team was and still is collaborating with teams of Acquia’s top-tier agency partners, delivering some of the flagship projects.

Why become an Acquia partner now?

Acquia’s reputation as a CMS leader has grown significantly since its foundation. The last few years in particular included multiple milestones that have had and will continue to have a huge impact on the future of Acquia and their standing in the industry.

In 2019, starting with the acquisitions of the MarTech platform Mautic and the CDP AgilOne, Acquia began establishing itself as a big player in the space and a true competitor to proprietary solutions such as Sitecore and Adobe. Moreover, they were themselves acquired by Vista Equity Partners for the hefty sum of $1 billion.

Things became even more interesting very early on in 2020, with Gartner abandoning its Magic Quadrant for Web Content Management and replacing it with the Magic Quadrant for Digital Experience Platforms, in which they positioned Acquia as a leader.

And 2020 had still more to offer. June saw the release of the long anticipated version 9 of Drupal, the open-source framework on which Acquia’s platform is based, which featured unprecedented improvements in all areas.

All this led to Gartner granting Acquia an even higher position in the 2021 edition of their Magic Quadrant for DXP, placing it as a top leader right behind Adobe. And, since Adobe is a proprietary platform, Acquia’s DXP is currently the number one choice among the open DXP. 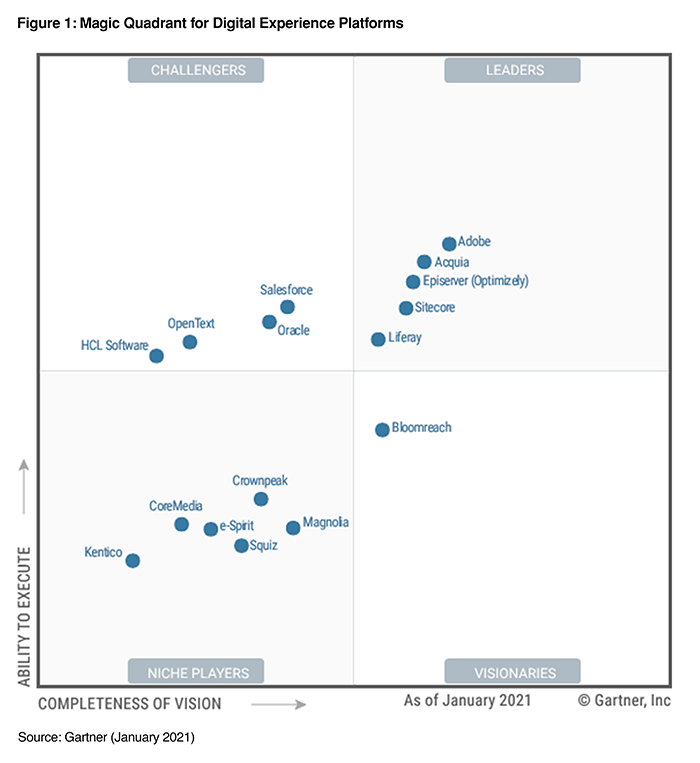 As long time proponents of Drupal and open source software, we at Agiledrop have always been fans of Acquia and their products, and it’s thus only natural that the most open DXP would be the most appealing one to us.

Having ourselves also transitioned in mindset from content management to digital experience management, and realizing the advantages that a well-architected digital experience platform offers, a partnership with Acquia was a no-brainer for us, even more so considering all their recent developments.

With continuous determination towards helping enterprises deliver digital solutions and experiences, Agiledrop is now one step closer to achieving our purpose.

By becoming an Acquia partner we now have access to solutions beyond Drupal (but deeply integrated with Drupal) that can help us serve enterprise clients. This is particularly important as so many businesses now need highly integrated omnichannel experiences due to the Covid-fueled digitalization.

On the other hand, Acquia gains a strong partner in the important up-and-coming Central European region, one which is strongly committed to supporting both the company itself and the Drupal project upon which it is based.

We’re looking forward to a long-standing and mutually beneficial partnership, and we’re very glad we get to be part of this journey with a company whose vision is this closely aligned with ours.