Only two and a half years after the release of Drupal 9, we’re getting a new major version of Drupal in just under a month’s time. Drupal 10, expected on December 14, is the latest version of the leading open-source enterprise CMS turned DXP.

The shorter timespan between the latest two releases is no surprise considering how the past few major Drupal versions have prioritized backward compatibility and thus offered an easy upgrade path for websites which are already up to date.

So, how is it that Drupal 10 still represents a major change for the platform?

One of the key aims of Drupal 10 is to commit even more strongly to the values of the open web, which is reflected in many of the latest strategic initiatives, as well as in the recent adjustment to the Drupal vision of the platform being intended for ambitious site builders.

An open web is for everyone, and as such Drupal should empower all of its users to enjoy and curate their own experiences. Open source in its very nature, Drupal has long been committed to inclusivity and accessibility. Now it strives to be even more beginner-friendly and appealing to new developers and other types of users from other tech communities.

In this article, we’ll discuss how the three core user types each stand to benefit from the changes coming soon in Drupal 10, and how these changes reflect the philosophy of the platform and the community around it.

Developers remain the most prevalent user group; those already familiar and/or working with Drupal will appreciate the update to Symfony 6 and PHP 8.1 as dependencies. However, Drupal 10 also tries to reach outside Drupal and appeal to developers from other communities.

One of the biggest upgrades here is streamlined JavaScript support, with modern JavaScript replacing certain uses of jQuery, in addition to the Decoupled Menus initiative which has committed to facilitating working with different JavaScript-based front-end frameworks and libraries.

Another interesting feature for the front end is the Starterkit theme generator. You can read more about some of the other front-end features, such as updates to Twig and specifics of the new Olivero theme, on Mike Herchel’s blog.

The second core user group are content managers and editors. These benefit predominantly from the update from CKEditor 4 to the streamlined version 5 and the inclusion of Claro as the default administration theme in Drupal core.

Marketers need easy to use editing capabilities which enable them to create customized content which is easily accessible by anybody. Both of the updates mentioned above take this into consideration, as does the new core front-end theme Olivero, which continues to prioritize accessibility while also providing support for more modern and currently desirable website features.

The last, but certainly not least important user group are (ambitious) site builders, who have become Drupal’s main new target group as we mentioned in the introductory section.

They have become accustomed to working with no-code / low-code tools, and many of the current strategic initiatives are focusing on improving this kind of site building experience.

The already mentioned Decoupled Menus initiative is definitely important here, as it facilitates the creation of more advanced digital experiences. There are also the Project Browser and Easy out of the box initiatives, both of which are focused on empowering beginners and less technically savvy users to create great experiences faster and more easily.

The Open Web is for everyone

But the main change of Drupal 10 is the change in philosophy – or, rather, an adjustment of Drupal’s existing philosophy to the trends and shifts in the spheres of web content and digital experience management.

The philosophy of the open web is that the web should be for everyone, which automatically makes Drupal a steward of the open web. As we’ve just highlighted, much of the current focus is on improving the experience of beginners and newcomers, both from other open-source communities as well as those with (little to) no technical knowledge.

In a recent interview we did with Justin Toupin of Aten Design, we talked about how Drupal has until now been very heavily focused on the developer persona, and how hopefully current and future initiatives in the context of no code and low code will empower other key personas as well.

So, Drupal 10 represents a crucial step from a framework which is majorly developer-oriented to a much more user-friendly platform for the other main user types that are gaining in popularity.

As long-time supporters of Drupal who have been heavily involved in the community, Agiledrop will celebrate this release by hosting and sponsoring a Drupal 10 release party in our Ljubljana headquarters on December 14. If you happen to be around at that time, we’d love to see you there. 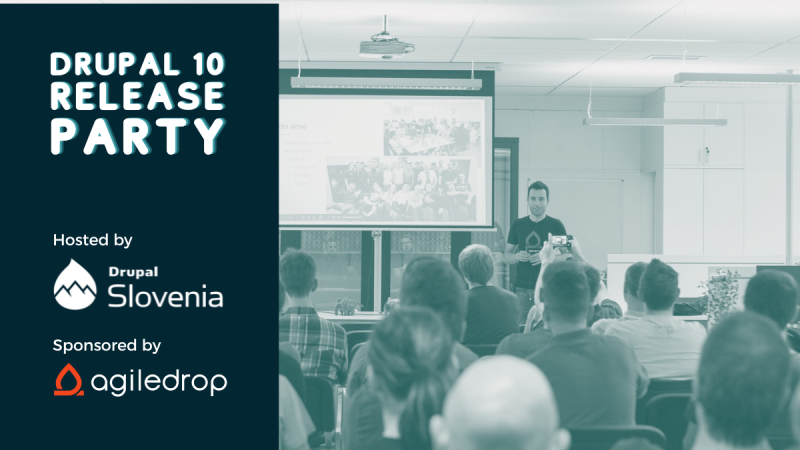 Looking for an agency partner to help you upgrade to Drupal 10? Or perhaps you’re looking to make some additional customizations to your Drupal site in light of the new release? Check out how we work with Drupal and don’t hesitate to reach out to us directly to learn more about working with us.